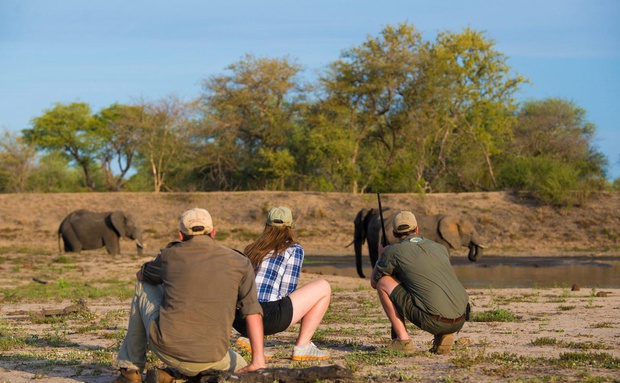 This is one for the adventurers and nature lovers who are looking for a walking safari experience like no other. Wilderness Trails is designed to offer 3 nights camping in a Greater Kruger Game Reserve, each night in a different location. Each day is spent walking through the 8000 hectare reserve in the Greater Kruger Park, and each night is spent at a new, fully set up mobile campsite in a scenic location in the wilderness. A maximum of 8 guests (sleeping in 4 tents) are taken on the Kruger walking adventure of a lifetime. A professional trained guide and tracker team will lead an informative, thrilling, and unforgettable walk in the wild. While guests are out exploring the Kruger on foot, a ground team will be taking down the first camp and setting up the next one in a new location. A packed brunch will be enjoyed in the bush, while snacks and refreshments will be on offer upon arrival at camp. Evening game drives complete the experience, before campfire dinners and bed in a canvas dome tent.

• Morning and afternoon walking trails, with brunch and siesta in the bush

• New campsite in a new location, set up prior to arrival, every afternoon

**Trails start weekly on Mondays or Thursdays only**

Review by Jeanne Joubert, group of six, May 2018
Rating - 5-star, excellent
Description - wonderful
Pros - Enjoyable, Great accommodation, Great experience, Well organized
Best uses - Relaxation, Educational
Recommend- Yes
Comments:
The hike of ± 37 km in the Greater Kruger Park was really well organized. Camping in three different beautiful locations along the route; encountering different animals like elephants, white rhino and many other types; learning about tracks, birds made it all worthwhile. The food was excellent and the company supplied everything from drinks, snacks. We really only had to carry a day pack for camera and binoculars. Can recommend this “luxury” hike.

• Campfire in the evenings

• Solar powered lanterns in the camp and one supplied per tent

• Light breakfast in the morning before departure, packed brunch to be enjoyed in the bush, snacks provided in the afternoon before 3-course dinner at night

• Evening game drives in the 8000 hectare

A TYPICAL DAY AT AFRICA ON FOOT WILDERNESS TRAILS
Departure times for walking safaris depends on the weather and seasons. Summer time walks will
depart earlier, while winter time departures will be later. A general summary of a day’s activity is as follows:

05h30 – Wake up to coffee and rusks, and kit up in walking gear. Start walk.
09h00 – Rest stop and breakfast. Continue with walk.
12h00 – Drive to next camp, where lunch will be served. Settle into camp life.
15h00 – The afternoon activity will be discussed - it will either be another walking expedition,         game drive or combination of both.
19h00 – Return to camp, enjoy refreshments around the fire before dinner is serve.

Wilderness Trails is located in the Greater Kruger, situated between Hoedpsruit and Phalaborwa in Limpopo Province. It is an 8000 hectare private game reserve, which shares open borders with the Kruger National Park. The Olifants River courses through the reserve, while prominent mountainous ridges and boulder koppies characterise the terrain, making it an incredibly diverse and interesting region to explore on foot.

From Hoedspruit:  The distance is roughly 50 km from the centre of Hoedspruit on the R40 towards Phalaborwa. Take the Grietjie Balule turn off and drive to the Grietjie Balule gate. After signing in at the gate continue straight for 1.1km. Turn right at the Chacma Bush Camp sign. Follow this road for 1.5km. Turn right through the chain gate (you will see the lodge on your left) and follow the road for 200m. Turn left at the 4-way junction. Follow the road left into the parking area.

Premium international drinks, the Maseke Balule Conservation fees: R450pp/night and R100pp bed levy included in your invoice. Please note that only Visa and MasterCard are accepted at the camp.

CHILDREN POLICY
Children from age 12 years and over are accepted. Children under age 12 are not accepted.

**Trails start weekly on Mondays or Thursdays only**

The average mean rainfall for the year is 350mm, with most rainfall occurring during mid-summer (November - February). The rainfall generally occurs in the form of thunderstorms where a downpour is experienced, very seldom lasting longer than a few hours. The average maximum temperatures range from 24°C in July to 31°C in January with the average minimum occurring in July at a temperature of 8.5°C.

Some of the world’s largest mammals find their home in South Africa, where elephant, giraffe, hippo, buffalo, and rhino reside in the wild Kruger Park and surrounding private game reserves. Game drives lead to unforgettable sightings of these large species, in addition to general game, such as zebra, impala, kudu, gnu, waterbuck, bushbuck, duiker, and wilderness trails steenbok, while nyala are frequent visitors to the camp itself.

Following in the footsteps of the herbivorous mammals are the carnivorous species of the South African bush. Lion, leopard, hyena, cheetah, African wild dog, and the Nile crocodile are some of the prominent predators residing in the Kruger. Smaller predators include jackal, mongoose, civet, and genet, honey badger, among others.

The Kruger habitat accommodates a complete smorgasbord of birder’s delights. Water birds such as herons, storks, plovers, spoonbills, and sandpipers are common along dam edges; kingfishers, orioles, robins, chats, larks, cisticolas, and coucals are some of the veld and woodland birds around; while birds of prey are seen and heard throughout the day.

Before travelling, guests are encouraged to consult their local doctors on anti-malarial medication and preparation, however a repellent stick or spray is effective and should be utilised.

Throughout the year, we recommend packing lightweight, neutral-coloured clothing with short and long sleeves. Walking safaris will require good walking shoes, long trousers, and a suitable backpack to carry water and sun block, among other essentials. Guests should pack sun protection in the form of sun block, sun hats, and glasses, while scarfs, jackets and gloves are needed for evening game drives during winter months.

Bring along cameras, binoculars and recording gadgets to keep a record of the many wildlife sightings. All camping gear will be provided, but guests should bring along a torch, insect repellent, or any other personal items that might be of interest in a camping environment.

Conservation fees: R450pp/night and R100pp bed levy will be included in your invoice

**Trails start weekly on Mondays or Thursdays only

Children aged 12 and over pay the full adult rate. Children under age 12 are not accepted.

Premium international drinks, the Maseke Balule Conservation fees: R450pp/night and R100pp bed levy will be included in your invoice. Please note that only Visa and MasterCard are accepted at the camp.

CHILDREN POLICY
Children from age 12 years and over are accepted. Children under age 12 are not accepted.

Guests should aim to arrive at 12h30 to the gate.

Departure Times: Guest have to be 12:30 at the gate on the first day of the trail