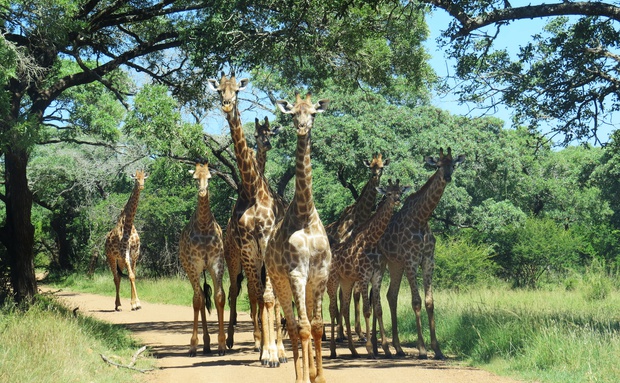 This tour includes the very best parks of South Africa starting in the Kruger National Park, continuing through Swaziland's Hlane Royal National Park, and then back into South Africa in Tembe Elephant Park before heading south to the oldest reserves in Africa, the Hluhluwe-Imfolozi Game Reserve.

Your guide will meet you at the Kruger-Mpumalanga International Airport in Nelspruit where the tour begin. We will enter the Kruger Park at Numbi gate, which is a 30 minute drive from the airport, from where our game drive will take us to our first park camp and accommodation. Depending on your time of arrival we will end day one with a 3-4 hour afternoon game drive from camp.

The Kruger National Park, in northeastern South Africa, is one of Africa’s largest game reserves. Its high density of wild animals includes the Big 5: lions, leopards, rhinos, elephants and buffaloes. Hundreds of other mammals make their home here, as do diverse bird species such as vultures, eagles and storks. Mountains, bush plains and tropical forests are all part of the landscape.

Our time here will include the following:

Your day will start with an early morning game drive before breakfast before packing and driving to either Crocodile Bridge or Malelane park gates. It will take us an hour from here to the Swaziland border post (nationalities requiring a visa for Swaziland) from where we will drive to Hlane Royal National Park.

Hlane Royal National Park is a protected area in northeastern Swaziland. A flat, lowland area with grassland and shallow pans, the park is traversed by the Umbuluzana River. Roads and trails offer views of diverse wildlife such as lions, elephants, hippos, white rhinos, leopards and giraffes. White-backed vultures and other raptors nest in the ancient hardwood trees. The park also hosts a colony of marabou storks.

After lunch there will be some time to explore the camp before our late afternoon game drive. Rhino and elephant regularly visits the dam in front of the restaurant while the resident hippos like to sun themselves in the afternoons.

The day will start with a game drive before we return to our accommodation for breakfast. We will drive further south today and exit Swaziland at the Lavumisa border post. Tembe Elephant park is situated in the north eastern corner of KwaZulu-Natal on border with Mozambique. Our route will take us across the Lebombo mountain range and over the Makathini flats to reach Tembe by lunch time.

Tembe Elephant Park is a 30 012 ha game reserve in Maputaland, KwaZulu-Natal, South Africa. It is adjacent to Ndumo Game Reserve. The park was developed by Tembe Tribal Authority and Ezemvelo KZN Wildlife. It was established in 1983 to protect elephants which used to migrate between Maputaland and southern Mozambique. These elephants were traumatised by poaching during the civil war in Mozambique so the park was only opened to the public in 1991. The park is now home to 250 elephants which host some of the largest living tuskers in the southern hemisphere. Nyala, kudu, giraffe, buffalo and rhino as well as lion, leopard and wilddog inhabits the sand forest and grasslands.

A final morning drive in Tembe will bring our time here to an end. After breakfast we will trace our route back over the Lebombo Mountains and turn again southwards to the Hluhluwe-Imfolozi Game reserve.

Hluhluwe–Imfolozi Park, formerly Hluhluwe–Umfolozi Game Reserve, is the oldest proclaimed nature reserve in Africa. It consists of 960 km² (96,000 ha) of hilly topography 280 kilometres (170 mi) north of Durban in central Zululand, KwaZulu-Natal, South Africa and is known for its rich wildlife and conservation efforts. The park is the only state-run park in KwaZulu-Natal where each of the big five game animals can be found. Due to conservation efforts, the park now has the largest population of white rhino in the world.

Our time here will include morning and afternoon game drives in open safari vehicles.

Depending on your flight time we may opt for an early morning drive or head straight after breakfast to Durban's King Shaka International Airport from where you'll catch your flight home or on wards to your next destination.